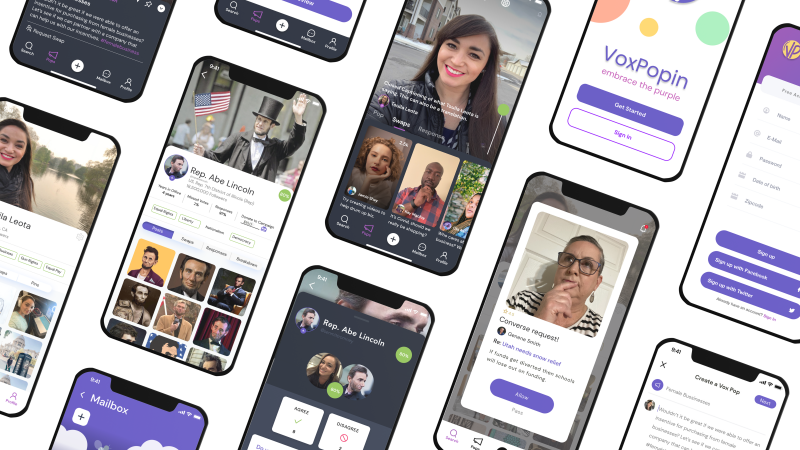 $150
pledged of$250,000 goal
2
Campaign ClosedYou no longer can pledge on the project
Share Campaign

View an interview of our CEO Lauren Solomon

Right now social media is all noise. We shout into the void, and no change comes from it. VoxPopin, is a new type of social media app that puts power behind your content by getting the collective voice to those who can instrument change.

Social media has been focused on keeping you addicted to platforms by only showing you content that’s aligned with your views. The result? They keep us dangerously divided with the illusion that we have the chance to go viral and finally be heard. No real action. No real impact.

Finally, a solution. With VoxPopin, you’ll post your perspective, swap ideas, and advocate for change. We're giving you power behind your content. With each like, your idea gets closer to being presented directly to your  leadership. In return, YOUR  leadership clearly sees what WE the people really care about.

VoxPopin is here to end the great divide by bringing order to the disorder of social media. By abandoning traditional algorithms and commenting, we are challenging you to engage with many opinions and points of view. Creating this new communication system, we aim to offer a deeper connection between our needs and the politician’s actions. When you look at each other and your leadership, we want you to see beyond red and blue, and embrace the purple.

People are protesting, but there is no action. They are rioting but there is no change. We're building a more peaceful and effective solution. If you want to get ahold of your senator currently, you would write them an email or a letter. This is the same exact way of doing it that you would if it were 1787. Democracy only works if the people can effectively communicate with their representatives.

People are communicating more on social media as well. But through algorithms and confirmation bias, we've destroyed the middle ground. We have lost the ability to discuss and find commonalities.

64% of Americans say social media has a mostly negative effect on the way things are going in the U.S. Over half of adolescents and teens have been bullied online. 73% of U.S. adults say it is likely that social media sites are censoring political viewpoints. In the 2020 Presidential election, nearly 90% of both democrats and republicans believed there would be lasting harm to the country if the other candidate was elected.

"There is such a need for a product like this. The technology on the Hill is so dated...We would especially use this when the Congressman is speaking in specific areas, it would be good to know what the people of that area care about, and what message would impact them more." - Director of Communication for U.S. Congressman

"When our department makes a statement, say it’s for small businesses, it’s very difficult to figure out if the small businesses approve of what we’ve done. We have all these opinions, and we have no idea if it’s coming from the people we were targeting or not." Media Officer at Department for Business, Energy, and Ind. Strategy, Her Majesty's Government

"Today our lead correspondence manager reported 600 letters on Israel. We have no idea how to use that data, and voters have no idea how many of their fellow voters are thinking the same thing they are. Your system is superior. " Political Scientist, Congressional Fellow in U.S. Senate

Users create a "pop" or a video post, that they can tag a politician in. This video goes out to others that are represented by the same politician, and they are able to vote up or down on it. With enough votes, the video gets posted to the politicians profile for response. Shortly after the same video also goes to the candidates running against that politician to also respond. We're holding politicians responsible for getting back to the people, and enhancing the flow of communication of the people.

In efforts to make this a more mentally healthy social media app, we have eliminated traditional written commenting. If you want to comment or "swap" ideas with the creator of the video, you have to submit a video response. The creator also has the option of making responders request to swap. They are able to swap videos back and forth.

We are also harnessing algorithms in the interest of our users. Users are also able to look at the politicians profiles, and see what percentage they agree or disagree with them. Users will be able to see past party lines, and make more educated decisions about the person and if they are representing their best interests.

Where are we now

Lauren Solomon, our CEO is also a UX Designer, and has used her skills to design out the alpha and beta in its entirety. It is currently being developed out. We need to raise funds to engage data scientist and cyber security specialists to make sure that that security is top notch. We also are looking to bring funds in to help up set up and execute our Alpha testing. Dr. Savannah Johnston, our CPS, has been assisting us in spreading the word of VoxPopin on Capitol Hill so we can get politicians at the highest levels of government signed up to participate. Depending on which states we are able to bring on, will determine where our Alpha tests take place. Depending on that location we will need to advertise and connect with influencers in the area to bring in as participants in the alpha.

2 Supporters
Select this reward
250.00 USD
Access to the Alpha

The alpha will be invite only. With your donation you can secure access to the alpha when it becomes available in your area.

Premium account access to the alpha beta and when it becomes available in your area. What a premium account offers is data insights into the interactions on your posts.

2 Supporters
Select this reward
250.00 USD
Access to the Alpha

The alpha will be invite only. With your donation you can secure access to the alpha when it becomes available in your area.

Premium account access to the alpha beta and when it becomes available in your area. What a premium account offers is data insights into the interactions on your posts.